Where every piece of junk has endless possibilities!

I have someone I want yall to meet. He is kinda new around here, he is also kinda shy, and you will be seeing a lot more of him on the Frontier….

This is Hurley (I also call him Biscuit sometimes)!

Hurley came into our lives on November 18th last year. The evening news features adoptable pets from around the region every few weeks or so and when we saw him we knew we had to have him.

Hurley is a 4 year old black and white Terrier mix (he reminds me of the dog from the Mutts Comic Strip) (do people still ready comic strips?) and has had a few homes over the past few years, though he is extremely well behaved (unless the doorbell rings).

On the drive home from the Shelter right after I picked him up he threw up on my passenger seat. I knew it was meant to be. He spent the next few weeks settling in. It didn’t take long for their to be a Hurley sized bed in every room.

Around Christmas he gave us a little scare with a twisted back…that I thought for sure was some kind of incurable disease, after a very nerve racking scary weekend, we took him to the vet and were sent home with some muscle relaxers.  He was right as rain a week later.

He is such a funny little creature he loves most people but first he has to bark at them furiously….I guess so they know who is in charge. He spends most days curled up in his bed on the floor of my office. 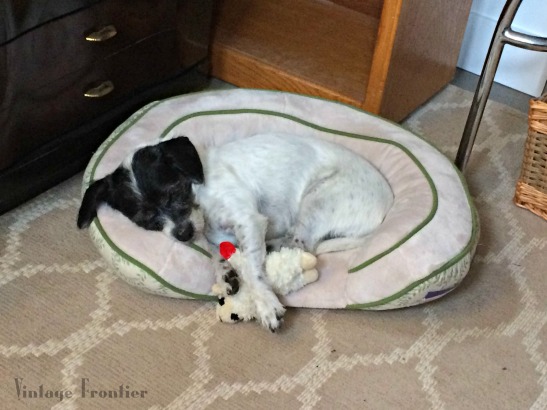 He also is quite photogenic. As a new years resolution The Hubs and I decided to learn a little more and become better photographers, Hurley has become our favorite subject.

My favorite thing is to roll him up in a blanket like a burrito and carry him around the house…this is not one of his favorite things. 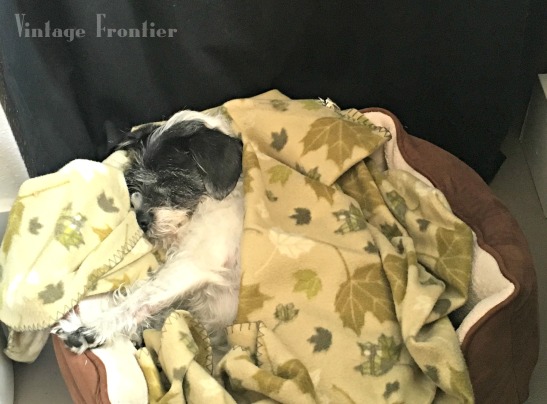 He likes playing fetch and tug and long walks to the park (as long as no one vicious trys to attack us…and by attack I mean walk by us as they enjoy their own afternoon stroll).

He also likes to follow me all over the house and around the yard and garage as I do various things so if this cute little fur ball starts to pop up in photos I wanted you to have an idea of who he was (and also be jealous of the amazing little dog we have)!

Do yall have any pets? What’s your favorite thing about them.

See yall around the Frontier,

This entry was posted on April 15, 2016 by vintagefrontier in Uncategorized.

Whats new on The Frontier.

Also On The Frontier